Warning: call_user_func_array() expects parameter 1 to be a valid callback, class 'AGPressGraph\manipulator' does not have a method 'httpsCanonicalURL' in /home/customer/www/amishlifebooks.com/public_html/wp-includes/class-wp-hook.php on line 303

You are here: Home / Archives for David Weaver-Zercher 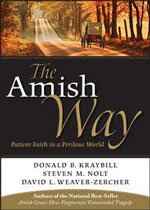 This second book by the authors of the award-winning Amish Grace sheds further light on the Amish, this time on their faith, spirituality, and spiritual practices. They interpret the distinctive practices of the Amish way of life and spirituality in their cultural context and explore their applicability for the wider world. Using a holistic perspective, the book tells the story of Amish religious experience in the words of the Amish themselves. Due to their long-standing friendships and relationships with Amish people, this author team may be the only set of interpreters able to provide an outsider-insider perspective. MORE DETAILS. 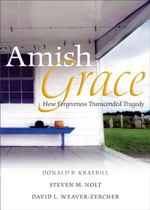 On Monday morning, October 2, 2006, a gunman entered a one-room Amish school in Nickel Mines, Pennsylvania. In front of twenty-five horrified pupils, thirty-two-year-old Charles Roberts ordered the boys and the teacher to leave. After tying the legs of the ten remaining girls, Roberts prepared to shoot them execution style with an automatic rifle and four hundred rounds of ammunition that he brought for the task. The oldest hostage, a thirteen-year-old, begged Roberts to “shoot me first and let the little ones go.” Refusing her offer, he opened fire on all of them, killing five and leaving the others critically wounded. He then shot himself as police stormed the building. His motivation? “I’m angry at God for taking my little daughter,” he told the children before the massacre. MORE DETAILS.