Promise to Return: A Novel by Elizabeth Byler Younts 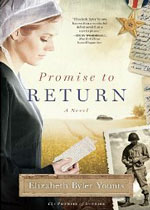 It’s 1943, and Miriam Coblentz and Henry Mast are nearing their wed­ding day when the unthinkable happens—Henry is drafted. However, since he is a part of the pacifist Amish tradition, Henry is sent to a conscientious objector Civilian Public Service camp. When he leaves for the work camp, his gaping absence turns Miriam’s life upside down. Little does she know it’s only the beginning… When Henry returns home, he brings news that shakes Miriam and their Amish community to the core. Henry believes God has called him to enlist in the army and fight for his country, leaving her to make an impor­tant decision: whether to choose loyalty to the peaceful life she’s always known or her love for Henry. Two worlds collide in this unforgettable debut novel, providing a fasci­nating and rare look into Amish culture during World War II. MORE DETAILS.