Warning: call_user_func_array() expects parameter 1 to be a valid callback, class 'AGPressGraph\manipulator' does not have a method 'httpsCanonicalURL' in /home/customer/www/amishlifebooks.com/public_html/wp-includes/class-wp-hook.php on line 287

You are here: Home / Archives for Books / Amish Biographies/Stories

Renegade Amish by Donald B. Kraybill 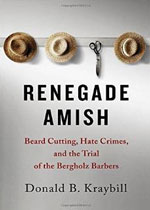 On the night of September 6, 2011, terror called at the Amish home of the Millers. Answering a late-night knock from what appeared to be an Amish neighbor, Mrs. Miller opened the door to her five estranged adult sons, a daughter, and their spouses. It wasn’t a friendly visit. Within moments, the men, wearing headlamps, had pulled their frightened father out of bed, pinned him into a chair, and—ignoring his tearful protests—sheared his hair and beard, leaving him razor-burned and dripping with blood. The women then turned on Mrs. Miller, yanking her prayer cap from her head and shredding it before cutting off her waist-long hair. About twenty minutes later, the attackers fled into the darkness, taking their parents’ hair as a trophy for their community.
MORE DETAILS. My story is not about my past, but about your future,’ says Marie Roberts Monville. In the startling tragedy of the Amish schoolhouse shooting at Nickel Mines, one story has never been told; Marie Roberts Monville, the wife of the man who created such horror, tells her story for the very first time. It is a story of sorrow and destruction, but also one of majestic deliverance, unending compassion, breathtaking forgiveness, and grace-filled redemption. MORE DETAILS.

New York Amish: Life in the Plain Communities of the Empire State by Karen M. Johnson-Weiner 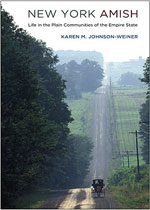 Johnson-Weiner welcomes readers into the lives of Amish families in different regions of New York State, including the oldest New York Amish community, the settlement in the Conewango Valley, and the diverse settlements of the Mohawk Valley and the St. Lawrence River Valley. The congregations in these regions range from the most conservative to the most progressive. Johnson-Weiner reveals how the Amish in particular regions of New York realize their core values in different ways; these variations shape not only their adjustment to new environments but also the ways in which townships and counties accommodate—and often benefit from—the presence of these thriving faith communities. MORE DETAILS.

Out of the Depths by Rachel Lofgren 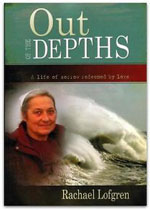 Read about the tragic events that destroyed Ludmilla’s security in her family structure and caused heart pain difficult to imagine. Broken and lonely, she arrives at a crossroad. Will Ludmilla make the right decision? Readers will find themselves drawn into Ludmilla’s story as she seeks answers . . . and at last finds God. As Jesus Christ lifts her from the depth of sin, Ludmilla exchanges her heartaches and longings for deep peace and joy. Her insatiable thirst for God’s Word will inspire readers to seek God more earnestly. MORE DETAILS.

My Amish Childhood: A True Story of Faith, Family, and the Simple Life by Jerry Eicher 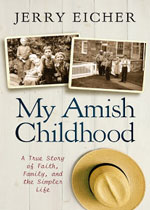 Coming Into Focus : From an Amish Childhood to a Journey of Many Choices by Mary Schwartz 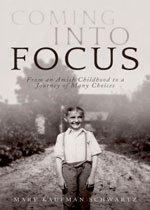 I often wonder how a young Amish girl roaming the fields on a farm in Ohio became a woman who lived in Europe, gave birth to a non-Amish son, divorced, became a psychologist, and married a wonderful Jewish man. My life has encompassed an incredible amount of richness, several periods of intense pain, and immense change. Sometimes I couldn’t seem to catch up with myself. As I started writing, I found the thoughts that came to me were the happy times of childhood, the wonderful memories I hold close to my heart. MORE DETAILS.

Dying to Live by Robert Yoder 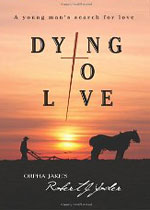 From the heart of the Amish culture in Holmes County, Ohio, comes this story of an Amish preacher’s faith in Christ, a story of a father’s love and prayers reaching across the expanse of time and touching the heart of his son seven years after his own death. A father’s prayer, answered by JESUS CHRIST Himself, turns the heart of a rebel son to the heart of God. A book conceived in suffering and birthed through prayer, Rob’s story and his deep personal relationship with Jesus Christ will touch your heart as you contemplate your own spiritual journey. MORE DETAILS.

A Heart to Belong by Johnny Miller 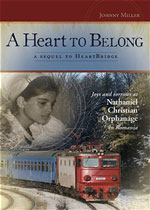 Within the heart of every child is a desire to belong, a yearning to feel at home. But where can innocent children turn when their small world becomes a place of abuse, neglect, or abject poverty that threatens to crush them? Will they find someone who cares? By 1997, more than fifty hurting children had found a safe place at the Nathaniel Christian Orphanage in Romania. Laugh and cry your way through the stories of the Millers second and third years at the orphanage. MORE DETAILS. Take a peek into the Amish world. Next to God, children, hard work and noodles what do these people love best? Horses? Going barefoot? Would you like to know? Here is a firsthand account from an “English” taxi driver who found out for herself. Her month by month stories will surprise and captivate you. Amish Reflections interweaves everyday living and simple faith with a delightful dash of humor. This is storytelling at its finest. Heart-warming personal encounters, shared laughter and recipes provide insight and spice for those who are curious to know more about the Amish. Life in the slow lane…experience it! MORE DETAILS.

The Unlikely Making of a Mennonite Minister by Herman Myers 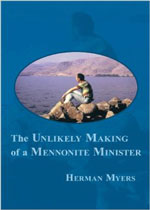 The Unlikely Making of A Mennonite Minister, is the autobiography of Herman Myers. It is the account of his journey through life from a Pennsylvania farmboy to serving as a Mennonite minister for 52 years. A high school drop-out, growing up without knowledge of who Mennonites were, he followed an early inner call to ministry. Through many twists and turns he responded to God’s call and was ordained to serve six Mennonite churches over a period of 52 years. He retired from pastoral ministry in 2010. MORE DETAILS.

Growing Up Amish: A memoir by Ira Wagler 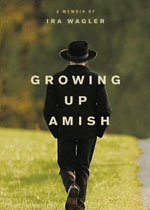 One fateful starless night, 17-year-old Ira Wagler got up at 2 AM, left a scribbled note under his pillow, packed all of his earthly belongings into in a little black duffel bag, and walked away from his home in the Amish settlement of Bloomfield, Iowa. Now, in this heartwarming memoir, Ira paints a vivid portrait of Amish life—from his childhood days on the family farm, his Rumspringa rite of passage at age 16, to his ultimate decision to leave the Amish Church for good at age 26. Growing Up Amish is the true story of one man’s quest to discover who he is and where he belongs. MORE DETAILS.

A Basketful of Broken Dishes by Naomi Stutzman 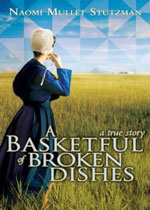 This true story demonstrates God’s faithfulness to an Amish couple. Simon’s refusal to submit to the Amish rules stresses his marriage. The bishops demand that Susan, his wife, must obey the rules she promised to keep and to shun her rebel husband. Who was she to obey, God or man? Together they become a perfect team to set their family free from the bondage of “religion.” The story is told by their daughter, Naomi, born to them after they leave this close-knit community. These heartbreaking and joyous stories are life-changing and proclaim the mighty truth that God continues to care for and work in the lives of the simple, the wounded, and the brokenhearted. MORE DETAILS. When a small-town Ohio girl met an Amish boy ice skating at the local pond, she had no idea all God had in store for her from this chance encounter. All Marlene knew was how gracefully he slid across the ice, and how gently he tightened her laces. Her curious and inquisitive nature was calmed by his patient, sensible answers. With problems at home, Marlene poured herself into band, cheerleading, singing, and twirling. But the true peace she was seeking was not found until one life-changing moment with God at her kitchen sink. The inner change was reflected outwardly as she embraced the Amish way of life. MORE DETAILS.